In today's Silicon Alley Insider, the legendary Apple founder, Steve Wozniak, says "his new Toyota Prius occasionally goes insane on the highway--and that it's a software problem, not a hardware problem. He has tried to tell Toyota and the US government, but they won't listen."

Scary. Wozniak's says his 2010 Toyota Prius will "unintentionally accelerate to as much as 97 miles (156 kilometers) per hour when he uses cruise control to increase his speed".

If Wozniak says the Prius has a software problem (beyond the well documented hardware problem), you've got to take this Toyota safety problem all the more seriously.

This accompanying HowTo by Consumer Reports presciently analyzes what to do when your Toyota accelerates on its own. Surprisingly, the solution is less intuitive that you might imagine. 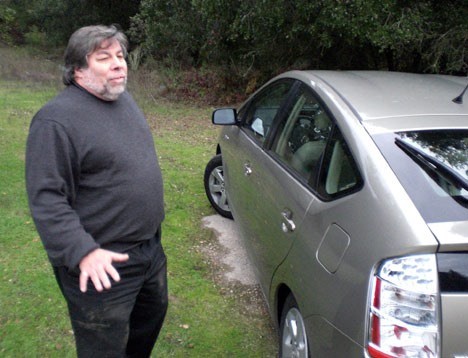 last night NPR had a segment discussing the hypothesis that electromagnetic interference could have cause electronic throttles to go haywire.... all i could think of was "Maybe they'll teach me more about this on LOST"

Aww snap. I've seen this before. Doctor Who, season 4.

I've also seen this before in Stephen King's Maximum Overdrive, starring one Emilio Estevez. The machines are rising y'all. Believe that.

In other news: if Prius was designed by Apple, you would get braking functionality only with 2.1.13 update. So maybe not all is bad

Ha--good point. Also, if Apple designed the Prius the steering wheel would be shaped like a rainbow pinwheel

That's why I always buy BMW ! ! ! Brake overrides the accelerator. Gotta love those germans, they know how to make safe cars.