Imagine this scenario: Late for work, you jump in the car. Going your usual 10 or maybe even 15 miles over the speed limit, suddenly a ball tumbles into the road, closely pursued by a little girl! Scared sh*tless, you slam on your brakes. 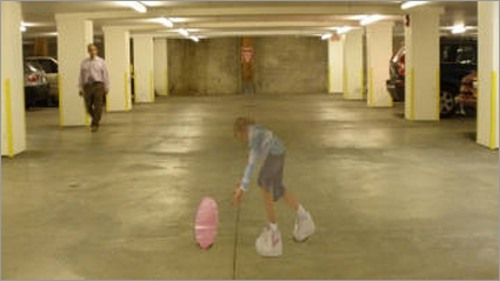 Except it's not imaginary. It's real. City officials of West Vancouver have created a 3D optical illusion designed to scare motorists straight:

"Beginning next Tuesday, the city will confront drivers with a 3D image of a child chasing a ball into the street, a 'lesson' to motorists to slow down. 'We need to expect the unexpected because anything could happen, whether it is a 3D image on the road ... or whether it's a live child or a dog running in front of the car, these are all things that we have to be able to control for in a vehicle,' David Dunne of the BCAA Traffic Safety Foundation told The Globe and Mail.

The break-slamming optical illusion cost about $15,000 to unleash on West Vancouver's city streets, and will be put in place close to an Elementary School for about a week. The 3D image will appear when the driver is about 100 feet away. 'You'll see this image start to rise off the pavement and it will look like a little child is crossing the street. As you get closer to the image, the image recedes into the pavement,' Dunne told The Globe and Mail.

City officials went on to note that cars traveling at a safe speed will be able to stop in time, while those with lead feet might be left to slam on the breaks, or so we'd imagine. What they didn't address is the possibility of injury to drivers who slam on their breaks after seeing what they think is a little girl running out in front of their car."

Lesson learned? Maybe. Lots of accidents? More than likely. Perhaps we should apply technology to something accident preventative instead of accident causing.

Can't wait to see how this one turns out.

Other worthwhile deals to check out:

Join the Next Reality AR Community

Get the latest in AR — delivered straight to your inbox.

yeah so after drivers get used to it they'll start driving through it. when the demonstration is over some little girl will get smashed cause they thought it was an illusion. gg canada

What happens when someone swerves to miss the 3 D immage and smashes into a real person? What then?